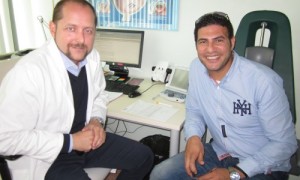 "„The morning after the surgery I felt like I was born with fresh new eyes. For the first time after all of these years, I was able to see every little detail. Suddenly, there was completely new world that has opened right in front of my eyes."

The top hotel manager, Mohammed Metwaly had been in charge of and was opening new operations of some of the most prestigious hotels including Carlton, Four Seasons and Kempinski in Saudi Arabia, Dubai, Qatar, and Bahrain. He is fluent in six foreign languages, loves diving, and relaxing  in his cottage in Čičmany. Before the laser surgery, he never used to put his – 8,5 dioptries aside. The day after the surgery he said: Suddenly there is a completely new world in front of me.

„The morning after the surgery I felt  like I was born with fresh new eyes. For the first time after all of these years, I was able to see every little detail. Suddenly, there was completely new world that has opened right in front of my eyes. I cannot even describe the feeling when I first woke up after the surgery, opened my eyes and saw my daugther beautifully clear without glasses for the first time. Up until then, I just reached out for my glasses on the bed- side table and until I put them on I literally could not see anything,“ revelas the Egyptian Mohammed Metwaly.

He came to Slovakia because of his wife. „We had been planning to have children and to start a family and we wanted our daughter to be born in Slovakia.“ The smiling, well-travelled Egyptian was fond of our country from the very start. Today, he owns a cottage in Čičmany and says that there is no better place for him to relax and rest than there. He majored in finance and was a student at an American hotel academy, led and opened some of the most prestigious hotels around the world, including  Carlton, Four Seasons and Kempinski in Dubai, Quatar, Bahrain and Saudi Arabia.
„Hotel management is quite difficult. You can not count hours, Fridays, or holidays. You need an extra-large amount of patience, love for people in general, and need to be able to cope with pressure and keep smiling even though you are barely standing on your feet from exhaustion and feel like crying because of it. Working in services is complicated.“

Femtolaser is the best! Mohammed thought about the surgery for three months. „I already knew Eye Clinic from before. It has a great reputation. Many of my relatives have undergone a surgery at this clinic already. They pointed out the high proficiency and kind approach of staff. There are several eye clinics on the Slovak market; therefore I tried to look for the best one. I gathered references, browsed the whole internet and the results were obvious – I decided to have my surgery - femtoLASIK at the best clinic there is. I did not hesitate with the choice of this laser method. FemtoLASIK is the best laser surgical method that today’s eye surgery can offer.”

He admits that the night before the surgery he could not sleep and feared of the following day's outcome. „When I came to the clinic, however, I felt a great atmosphere that was carried by the entire staff from the reception to the medical team. The nurse at the operating room calmed me down with her kind approach. In addition to this, I saw people coming out of the operating room just after their surgery and to my surprise, they all had a wide smile on their faces. This made me put all my fear behind me before I stepped into the operating room. “

And how does he remember the femtoLASIK surgical method? „I can only recall it as an interesting light show. The primary physician, MUDr. Piovarči, is great, he is an incredibly interesting person with a sense of patience and understanding for patients. He did everything he could for me. I am extremely thankful for this new view of the world he gave me. “