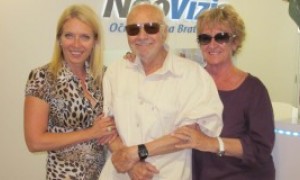 He emigrated to the USA with his family. Without speaking English, we worked himself up in three years – from a night vendor at a night shop, a supernumerary capacity and a scene-shifter he made it to the position of a director, whe received the prestigious EMMY award, which is often considered to be a „TV- Oscar“. After returning to Slovakia, he has undergone a laser surgical procedure on cataract at the eye clinic NeoVízia and declared: „I haven´t even seen such an amazing level of professionality and kindness at clinics in the USA, where I have lived and worked for more than thirty years.“

It is always a great honor for us, when patients share stories from their lives with us. We can discuss come of them for hours and hours.Their turbulent experiences, life values and the strength to overcome human burdens and hurdles is a motivation for every member of our clinic. One of our patients, the television and theater director, journalist, writer and theater actor Ernest Stredňanský, who underwent a laser surgery of cataract at the eye clinic NeoVízia, has left a deep imprint on all of us. His life was full of unexpected turns and unusual changes and reminds us of what most people imagine, when they hear the words the American dream.

The pre- station Germany
Up until the year 1968, he was a directior and director in chief of the Artistic Programme of the Czechoslovak television in the studio Bratislava. He directed nowadays legendary Monday inscenations, poetic moments, publicistic programmes and theatrical transmissions.
After the army of the Warsaw Agreement invaded the country in 1968, he managed to leav for Vienna and from there he got to Germany with his wife and children. „It was not an easy decision to leave behind my home land and everyhing that was once dear to me, but I had to,“ he remembers the era of that time. The director, who valued space for individual development above all else, could not bear to live in a country that was invaded by Soviet tanks that severely suppressed personal freedom.

„Up until this day I cannot forget the look on the face of the soldier, who was watching over the passing- through point at the border to Austria together with the State Security (StB). He had so much sadness in his eyes and a bitter smile on his face, it was as if he was trying to say – You are so lucky you get to leave...“ Ernest Stredňanský remembers the moment when he crossed over the border with his family. In Vienna, the employees of the Austrian radio and a certain producer, for whom he was already supposed to work in Slovakia, helped him out a lot. He made sure the children got a temporary stay in a Viennese children´s foster home and Ernest got entry visas into Germany. In Germany, a certain millionnaire offered them housing in his garden house, based on some friendly intervention of a lawyer, who also happened to be his wife Sylvia´s uncle. Ernest got a position in Free Europe, which moved all of them closer to their American dream.

Free Europe opened the door to the USA

„The employees of Free Europe had an amazing privilege at that time – they could get an American green card without any trouble, even though they had to go through the usual immigration process in order to obtain it. In Germany, a lot of people helped us and tried to give us a sense of having a home. However, despite their selfless efforts to help us, we still strived for the USA, especially because my Father went through hell in a German concentration camp, which is not exactly easily forgotten.“
After their arrival in Washington, D. C., he got the offer to teach Slovak to American diplomats, who were supposed to open the first American consulate in Bratislava. However, the family soon moved West from the capital. While his wife and daughter started to work at the fast food chain Jack in the Box, Stredňanský was hoping to make it in Hollywood. After arriving in California, a Korean who owned a shop of the food chain Seven Eleven offered him the position of a night clerk. For two dollars and fifty cents an hour he sold bread, wine, coffee, chewing gum and everything you will find in a Slovak night shop between 11 PM and 7 AM. „My son got a job at the gas station right next to me, my wife started teaching Czech at a special school in Monterey“ he recalls the tough start in a country he came to without speaking a single word of English. In a situation like this, Hollywood was just a surreal dream.

Auxiliary scene-shifter in KNTV
In Monterey (California), he got to know a local community of amateur actors. „Almost all of them had studied at an American Academy for Performing Arts, but they were having trouble finding acting jobs. During the day, they worked as bank clerks or had some other usual, available job and they fulfilled their acting dreams in their free time.“ A group of acting enthusiasts helped him take a step forward again – to the TV- channel KNTV in San José.
„I started out at the bottom of the chain. First as an auxilliary help, then a scene shifter and cameraman, for four dollars and seventy cents an  hour.“ However, he was promoted to the studio director eventually. He was responsible for all of the cameramen and service personnel. „I wanted to be a director again, so I decided that I had to learn English perfectly as soon as possible. I worked hard and I spent every free minute studying.“
It paid off. After three years, he was named director of news and advertising, but he also directed his own television shows. For a unique one, called „Christmans in san José“, he received the prestigious Emmy Award, often thought of as the Oscar of television. He started to teach television production on the side at universities in San José and San Francisco.
After ten years of workin in television, he received an offer for the position of a reporter of the Voice of America in Washington, D. C. „I wanted to whisper the words my home again“ he recalls with the words of a poet. „I went through a serious selection procedure and nine usual inspections, including the FBI. I stayed with the Voice of America until I went into pension with my second wife, actress and director of Slovak Radio, Sylvia Stredňanská, the ex- wife of the Slovak actor Ivan Letko, who also spent the two years she lived in the United States working at the Voice of America as an external reporter.

„My first husband Ivan recently mentioned it to me, that he underwent a laser cataract surgery at the eye clinic NeoVízia and was extremely satisfied with the results. Ernest had already been suffering from cataract back in the USA, but he was always putting off the procedure. Ivan was singing praise about the surgery, so naturally, we wanted to find the best method,“ explains his charming wife, Sylvia, who accompanied her husband to the procedure as well as all other appointments at the clinic. „At NeoVízia, I experienced something fantastic that I normally would not expect at a Slovak clinic. When you return to Slovakia after living in the USA for so many years, you are a little sceptical. At the clinic, however, I found fantastic professionalism, kindness and sympathy. I have known a lot of exceptional American doctors, but the primary physician, MUDr. Piovarci, literally outperformed them with his calmness, professionalism and kindness. MUDr. Smorádková explained the whole surgical process to me before the actual procedure, kindly and with patience. My wife and I do not call her anything but a „class professor“ anymore. After the laser cataract surgery, naturally, I can see perfectly. And not just that. Thanks to the amazingly kind approach at this clinic, the whole world has lightened up for me.“